Taiping – The Old Capital of Perak

Taiping – The Old Capital of Perak

Published on Nil | by taipingphotogallery.blogspot.com

Taiping is known by many names – “City of Lasting Peace”, “City of Everlasting Peace”, “Tin Town”, “The Town That Tin Built”, “Town of Rain”, “Rain Town” or “Raintown” and “Town of Heritage” or “Heritage Town”.

In his book, “British Malaya – An Account On The Origin and Progress Of British Influence In Malaya“, Sir Frank Swettenham gave a vivid account about old Perak before British involvement in the affairs of the state.

With part of the Larut Hills in the distant background, this was probably the general area where the towns of Taiping and Kamunting were established in 1874.

The establishment of Taiping and Kamunting towns is best described by Leonard Wray, the curator of Perak Museum, who wrote in the Perak Museum Notes No.3 published in 1894:

The present Taiping town  and the area stretching all the way to Kuala Sepatang (Port Weld) in the east and up to Kamunting in the north, were, at one time, the scenes of  fierce fighting, rioting and devastation during the four Larut Wars that began in 1861.

Thirteen years later, on 20 January, 1874,  the Pangkor Treaty officially marked the end of these protracted wars and the beginning of a new era of peace, development and prosperity for the region.

Without the British involvement in Perak’s administration, Taiping would probably not exists
as it is today.

– Che Long Jaffar discovered tin and opened a mine at a place called Galian Pao (Klian Pau, near where the museum now stands) 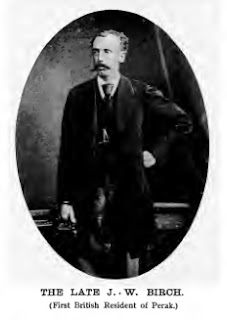 – Captain Speedy , as Assistant Resident,  was instructed to establish the townships
Taiping and Kamunting.

The Secretary to Resident’s House

This was the first English school in the Federated Malay States and was located in Kamunting. It not only served as a centre of education for Larut district but also for other neighbouring districts such as Matang and nearby towns. The school was closed in the late 1930’s.

Established in 1879, the Perak Prison was the main prison for long sentenced convicts of the Federated Malay States. It housed the Government Printing Office, a bakery and a laundry, where the prisoners did light work. Today, it is the country’s best example of a 19th century prison complex.

Taiping was almost burnt to the ground during a big fire that destroyed almost all the wooden houses in town. The British were determined to make Taiping the administrative centre of Perak and began to rebuilt the town according to the gridiron system which was very popular then in Britain.

The Chinese mining community founded the Yeng Wah (Chinese Pauper) Hospital in 1880 to combat an outbreak of beri-beri. It was taken over by the British administration and relocated to Main Road in 1881.

Initially the clock tower was built of timber in 1881 “at a point about equidistant from the Chinese theatre, the market and other much frequented places“.

Some years later, it was fortified with chamfered slits for guns. The police station also doubled as a fire station. The first fire brigade in the Federated Malay States was made up of members of the Perak Armed Police and later the Malay States Guides established by Colonel Walker.

Fort Carnavon is situated on a little hill just opposite the All Saints Anglican Church and beside the Taiping Prison complex. It was used to store ammunition supply belonging to the army and is still operational till today.

This government building at Kota Road was once the premises of the Chartered Bank of India, Australia and China, later known as the Standard Chartered Bank, which opened its Taiping agency in 1889. Today, it houses the Taiping Public Library. 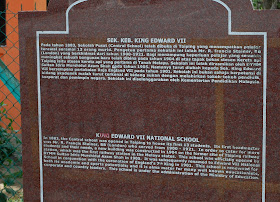 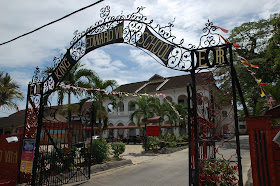 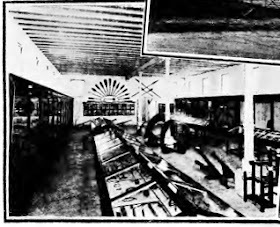 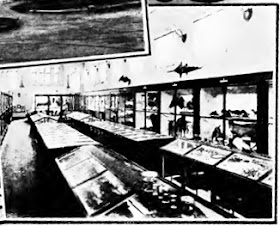 The initial District Office was established in 1883 by the British administration but it was found to be inadequate and a new Government Office Building was built in 1897 to replace it.

The Taiping Market consists of two buildings, the Old Market built in 1884 and the New Market built in1885, each one a timber post and truss structure, “220 feet long by 60 feet wide, concrete floor and iron roof”, with a middle clerestory.

The markets were designed by the colonial Public Works Department (PWD) and were divided into different zones catering to the Malay and other communities.

The old market, built in 1884, stretches from Main Road (Jala Taming Sari) to Kota Road (Jalan Kota) which comprised the fish and fruits market and the pork market.

The first post office in the Federated Malay States built in 1884, to replace an earlier timber building. The post from Taiping was carried by a relay of runners and ponies.

“The first railway undertaken was a line of only eight miles from Taipeng, the mining centre of Larut, to a point called Sa-petang (afterwards named Port Weld), on a deep water inlet of the Larut River navigable for small steamers. That line was constructed by two divisions of Ceylon pioneers, lent by the Government of Ceylon, and was completed in 1884.”

The main reason to build the railway was that it was the most efficient way then to export tin and tin ore and to import foodstuffs and mining equipment. It also provided cheap and fast transport for the vast numbers of Chinese labourers who entered and leave the state in search of work at the tin mines. 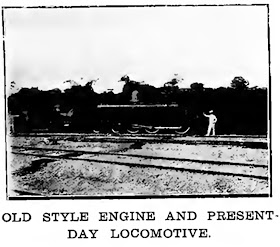 The first Anglican church in the Malay States opened in 1886. The timber building was designed by G.A Lefroy and the site donated by W.M Drummond, a planter from Shanghai. In 1898, the graveyard was already ‘much besprinkled with the tombstones of many a young man stricken down in the heyday of youth, or British official who, after spending the best years of his life in the service of the State, has failed to gain his pension, and now lies buried here…’

Founded in 1887 by Chung, Keng Quee and others as an association of people from Kuangtung (Guangdong) province in South China.

Ho-hsien-ku Miaou or Temple for Ho, the Immortal Lady of the Eight Immortals. Lady Ho is believed to have been a native of Tseng-ch’eng county, Kuang-Chou prefecture. The temple was probably built at about the same time as the Kwangtung Association as it was located just next door to it.

Founded around 1887, the Tseng Lung hui-kuan is the association of people from Tseng ch’eng and Lungmen counties of Kuang-chou prefecture in South China.

This was the official annual publication of the Perak Government and was printed by the Government Printing Office located at the Taiping Gaol or Prison. 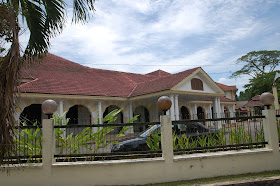 This government building was once the premises of the Chartered Bank of India, Australia and China, later known as the Standard Chartered Bank, which opened its Taiping agency in 1888. Today, it houses the public library.

“The year 1889 was notable in the history of the protected States, for in that year Sir Hugh Low retired from his post as Resident of Perak. … and the first bank, a branch of the Chartered Bank of India, Australia, and China, was opened at the head-quarters of the Perak Government.” 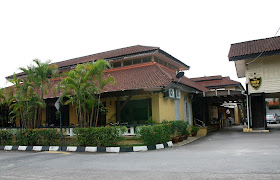 Nawab Din was an ex-police personnel under Col. Walker. On his retirement, Nawab became a Master Tailor. It was in this building that he produced uniforms for the army and police. He became wealthy and well known as a textile tycoon. This building at Main Road is now abandoned.

A water fountain was donated by the Chinese mining community and placed in the centre of the gardens.

Mr Scott was credited for the beautiful layout of the gardens and Colonel Walker also played a very significant role in helping to establish the gardens from abandoned mining lands. 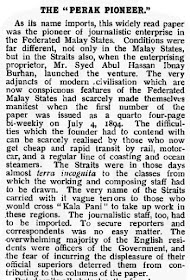 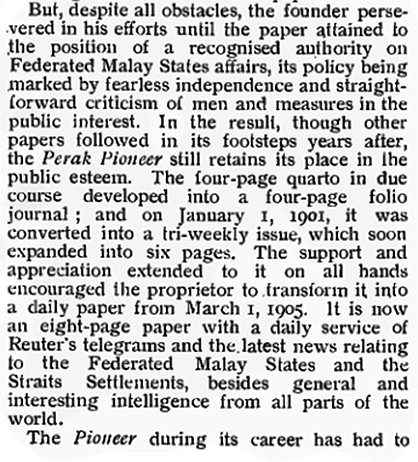 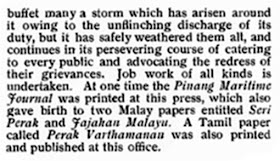 This Tamil paper was published weekly.

This weekly newspaer was published in Malay.

In 1895, the construction of a new Government Office building was initiated to replace the old District Office building built in 1883. This new Victorian-styled building “which is well designed and constructed provided accommodation for a Council Chamber, Offices for the Secretariat, Treasury, Audit, Education and Forest Department”. The building was completed in 1897 and began operations in 1898. Today, it is the premises of the Larut-Matang-Selama District and Land Office.

This is the oldest mosque in Taiping and was built in brick in 1897. It has an intriguing six-sided facade.  It was originally a Hanafi mosque used by the Indian Muslim community of Kota. In the early 20th century it was given over to the Malay community and called the ‘Malay Mosque’ (Masjid Melayu).

In 1889, the first convent was started in nearby Klian Puah by three sisters from the convent in Penang. The class and orphanage in Taiping were upgraded when the present school building at Kota Road opened in 1938.

In May 1941, the British requisitioned it for a large military hospital but in December it was taken over by the Japanese. Towards the end of the war, the Taiping Convent became the headquarters of the Japanese military administration, the Gun-sei Kan-bu.

Built about the same time as the convent School, this church is one of the finest Catholic churches in the country.

“The Ceylonese Tamils came to Perak in the 1880s to join the civil service and build the railways. In 1889, they founded the Ceylonese Association and put up the building two years later.” 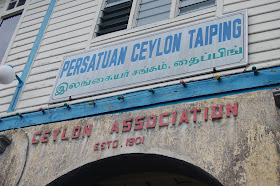 Punjabi Association was founded in 1903 by the Sikhs of the Malay States Guides with the aim of improving the social position of the Sikhs in Malaya. 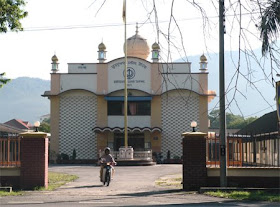 This Catholic boys’ school was established in 1915 and 13 years later the original building was extended with a wing on each side. During the Japanese Occupation, the school served in turn as Nippon-Go Gakko (Japanese school), Kempetai (Japanese military police) base and Japanese officers’ hotel.
Read More at  SGI official website

This temple at Kota Road was built in 1928 to replace the old temple that was located at the foot of Bukit Larut. The original temple was built in 1895.

Built in 1928, the Peace Hotel was originally the residential home of Mr. Toh Kay Beng who was a businessman who owned Taik Ho & Co. dealing in European commodities. He also set up a Chinese rice wine brewery called Guan Ho Sdn. Bhd. His son Toh Eng Hoe inherited this building which was later sold to a Mr. Chew. After the World War II, it became the headquarters of Lee Rubbers. The building was converted into an office and the upper floor into a rest house. In 1959, the building was acquired by a Mr. Teoh and his business partner Mr. Ong. It was converted into a coffeeshop with the first floor turned into a hotel. It is situated at the junction of Jalan Iskandar and Jalan Panggung Wayang. 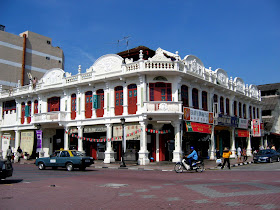 Built in 1929, this hotel was the headquarters of the rubber dealers association. 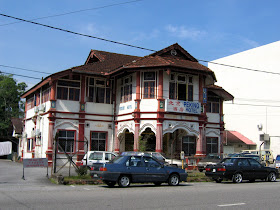 Taiping Airport  is located in Assam Kumbang. It is also called Tekah Aerodrome.  The airport was built in 1929 for commercial purposes serving British officers and European merchants. It was the first airport officially established in  Federated Malay States as well as in South East Asia.
=======================
1930

Ipoh was made the capital of Perak

The Taiping War Cemetery has more than 850 World War II casualties including more than 500 who remain unidentified. It is the final resting place for Allied personnel who were killed during  the Malayan Campaign and the Japanese occupation of Malaya. Servicemen who died after the war or during their posting in northern Malaya prior to the Malayan Emergency are also interred here.

The cemetery is located along Jalan  Bukit Larut, Taiping, Perak, Malaysia and was erected and maintained by the Commonwealth War Graves Commission.

During this period there were eight British Resident Commissioners in Perak

A little footnote on Taiping:

Taiping in Perak was originally called Klian Pauh, a name derived from ‘Mine’ and a small variety of mango.

Following the discovery of tin there, the influx of Chinese from China (the Ghee Hin and the Hai San clans), the Larut Wars and the 1874 Pangkor Treaty, it was re-named ‘Taiping’ by the Hai San which in Chinese means ‘Heavenly Kingdom of Great Peace’.

Nearby Klian Baharu was renamed by the Ghee Hin as Kamunting.

The 1st railway track in Malaya was built from Port Weld to Taiping.