Town that grew from a tin tycoon’s mansion

Town that grew from a tin tycoon’s mansion Falim House was owned by prominent miner, the late Foo Nyit See, who built his version of a self-contained township around the mansion in the 1920s.

THE white mansion along Jalan Lahat in Falim, Ipoh, is simply eye-catching.

There is an intriguing story behind it – about a man named Foo Choo Choon – said to have been the richest Chinese man in the world in the 1890s.

A tin mining tycoon, Choo Choon transferred ownership of the mansion and surrounding land to another mining tycoon, Foo Nyit Tse, as some form of settlement in 1920.

The mansion was rebuilt by Nyit Tse who named it Falim House.

Liew Heng Yuen, who was born and raised in Falim and still lives there with his family, said the suburb and the Falim New Village had changed a lot over the decades, but its history somehow remained fresh in the minds of the residents.

He attributed that to the Falim House. This building in Falim was built in 1906.

“There are rebuilt village houses, and some parts of the village made way for development, and new housing estates are coming up,” Liew said of Falim and the new village.

Liew and his wife Lai Yim Fun, who operate a drinks and fruit stall in Jalan Lahat, are proud and happy to share stories of Falim, or wah lam si in Cantonese that means magnificent forest city.

They have been running the stall opposite Falim House for 22 years.

“We used to open seven days a week to make ends meet.

“Now that our three children are grown up and financially independent, we rest on Sundays,” said Lai, adding that they open between 11.30am and 5.30pm.

The stall is also a meeting point for residents and old friends.

Liew said the row of pre-war shoplots along Jalan Lahat and opposite Falim House was a reminder of the good old days when Falim was a bustling town.

One of the shophouses dates back to 1906.

“Falim has changed so much. We are also getting older,” said Liew. 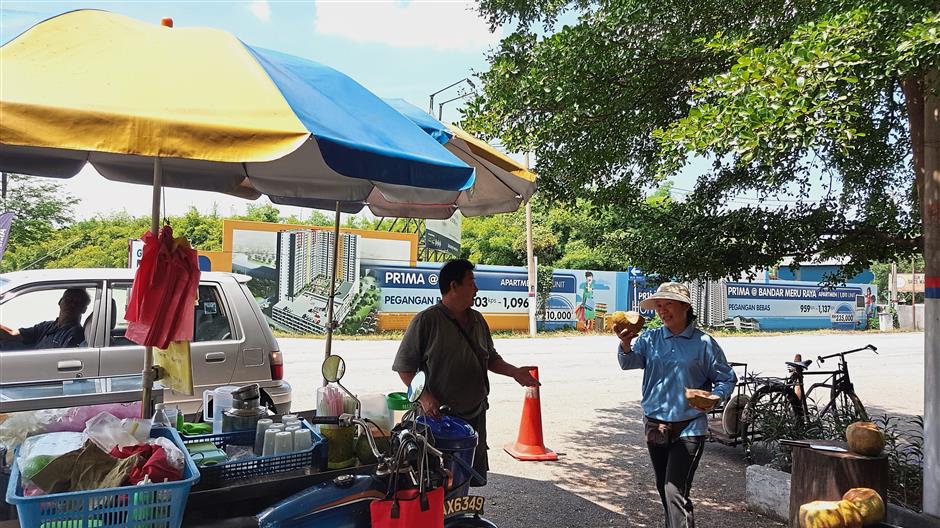 Husband-wife-team Liew (left) and Lai have been running a drinks and fruit stall opposite Falim House for 22 years.

The houses around Falim House that served as workers’ quarters are no longer there.

While Liew is proud of Falim’s history and development, he said concerted effort should be made to package the area in order to bring economic development.

He said the slow-paced neighbourhood made it difficult for young people to find jobs.

“People from Kuala Lumpur make day trips to Falim for its food.

“A two-hour drive from Kuala Lumpur or Penang is not far,” he said. The five-foot way of a row of old shophouses in Falim.

Falim is at the fringe of Ipoh city.

Tan and his wife have two sons, one studying in a university in Johor and the other in secondary school in Ipoh.

His wife helps him at the shop.

Tan concurred that there were limited jobs in Falim and Ipoh and that some of the residents’ children looked to Singapore for employment.

While the new commerical centre across the row of old shophouses is a symbol of modern development, Tan said it should have facilities and a place to hold events to attract visitors.

“It is quiet here these days especially since Jalan Lahat was turned into a one-way street during Chinese New Year.

“There is no greenery and the sun can be glaring,” said Tan. Tan Voon Kong has been operating his small business along Jalan Lahat for 21 years.