Ahmad Badawi (in green) at the event.

A SIMPLE feat of each person planting more than 10 mangrove seedlings within two hours was all it took to be in the record books.

Institute of Foresters Malaysia (IRIM) came up with this idea together with Ship for South-East Asian Youth Programme (SSEAYP).

They had about 1,800 people planting 20,200 mangrove seedlings in Dayang Bunting Forest Reserve, Langkawi recently to achieve this feat.

The new record erased the previous record of planting 11,111 mangrove seedlings in Perlis in 2011.

The Malaysia Book of Records set is for the Largest “Paya Bakau” tree planting event. 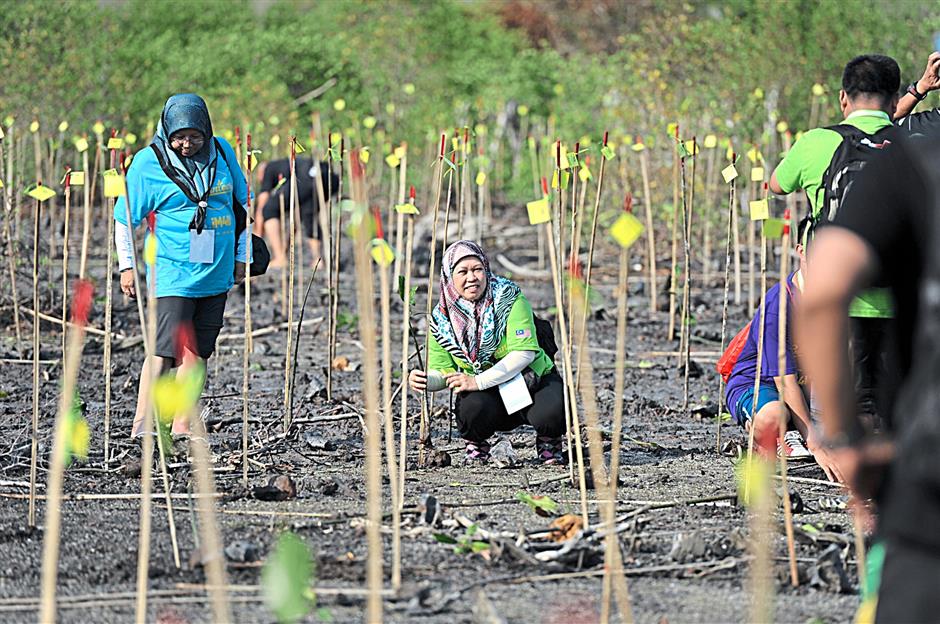 A volunteer planting a tree during the record- breaking attempt in Langkawi.

SSEAYP had 300 participants from 11 countries joining in the planting activity.

They were from the Philippines, Myanmar, Cambodia, Laos, Thailand, Vietnam, Indonesia, Brunei, Singapore, Japan and Malaysia. One of the participants planting a mangrove seedling.

Also involved in the planting exercise were Japanese Cabinet office vice-minister Kazumichi Sakamoto, His Excellency Khamphan Anlawan Ambassador of the Embassy of the Lao People’s Democratic Republic and other Asean embassy representatives.

IRIM honorary secretary Mohd Yussainy Md Yusop said the planting of the seedlings was aimed at helping to create a natural barrier.

“Eventually, these trees will grow and would also contribute towards the ecosystem and be a natural nursery for small fish, that will in time, result in fishermen having a good catch.

“The mangrove trees would act as a natural barrier and would reduce the impact on the main island if there was a tsunami,’’ he said.

Mohd Yussainy, who played a major role in organising this event, was also very happy to see many locals together with Asean nations keen on protecting the mangrove at the coastline.

He said that some mangrove forests on the coast are lost because of soil erosions and generating a new batch of trees would help keep the coast filled with wildlife.