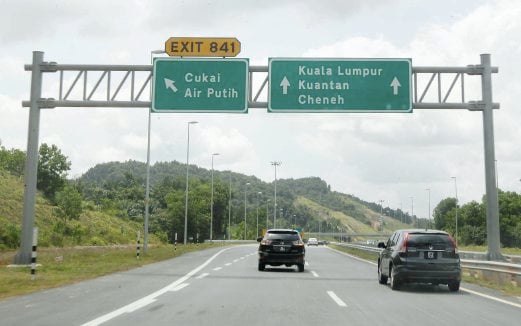 KEMAMAN: The completion of the East Coast Expressway (LPT2) linking Jabor in Pahang and Gemuroh in Kuala Terengganu was officially opened to motorists today.

Menteri Besar Datuk Ahmad Razif Abdul Rahman said the LPT2 worth RM4.1 billion was a vital factor to attract more investors in many fields including the tourism industry to boost Terengganu’s economy .

Ahmad Razif said the expressway was equipped with 10 toll plazas, three rest areas and 98 bridges along its 184 kilometres stretch, and would be toll-free for the next six months.

He said the government was informed that LPT2’s Certificate of Practical Ocupation (CPO) has been approved by the Transport Ministry.

Ahmad Razif said with the completion of the LPT2, the journey from Kuala Terengganu to Kuala Lumpur is shortened to four hours while from Gemuroh to Jabor would only take one hour and a half.

“The transport facilities provided by the government were to enable people of Terengganu earn the income up to RM8,000 in the year 2020,” he said to reporters after visiting the LPT2 at the Perising Rest Area, here, today.