Melaka is one of the last strongholds in Malaysia for this critically endangered species of sea turtles.  Annually, 400 – 450 nestings are recorded in Melaka making this the biggest nesting population in Peninsular Malaysia. Padang Kemunting is known as one of the main landings for hawksbills, with an average annual landing of 100 nests, which contributes to 20-25 % of the total number of nesting in Melaka.

Life at sea for any turtle is never easy. Only 1 out of 1,000 of hatchlings will survive to adulthood due to threats and dangers surrounding them all the time no matter where they are. A sea turtle has to beat all odds in order to continue its life cycle. Hawksbill turtles only reach sexual maturity after approximately 20 years of age, and reproducing has always been tough as their numbers are declining. Female hawksbills that are ready to lay their eggs will make their way back to the same beaches where they were hatched in order to nest. However, in today’s era of rapid development, all too often the beaches are too brightly lit and crowded, or gone to make way for human use.

Why is it important to save sea turtles? Sea turtles have been swimming Earth’s oceans for over 100 million years. They play a key role in maintaining healthy coral reefs. Hawksbill turtles graze on sponges, preventing sponges from outgrowing corals and smothering coral reefs.

According to WWF-Malaysia Melaka Team Leader Lau Min Min, the main threat to nesting hawksbill turtles is unsustainable coastal development, which has boomed in the past three ‎decades. Much of the coastline in Melaka has been transformed into an urban landscape with more beaches becoming unsuitable for nesting. Protection of the remaining prime nesting beaches is urgent and vital towards the survival of this species, and ensures that Melaka continues to welcome them back to its shore.

The Melaka State Government has a sound track record in receiving international accolades including the 3rd ASEAN Environmentally Sustainable Cities Award in 2014 and Melaka City is recognised by UNESCO as a World Heritage Site. The state government has also formalised a vision to transform Melaka into a Green Technology State by 2020.

Making the nesting beaches more suitable through green initiatives and protecting the habitat of hawksbill turtles will add to Melaka’s notable achievements. Conserving the hawksbills –a natural heritage and pride of Melaka – will not only complement the state’s sustainable development efforts but also contribute towards achieving the Sustainable Development Goals 2030 adopted by world leaders at the United Nations assembly last year.

WWF-Malaysia is actively involved in conserving hawksbill turtles together with local partners. Turtle Guardians, an initiative led by WWF Field Biologists, comprises a group of passionate marine conservation graduates and members of the local communities in patrolling the nesting beaches every night during each nesting season to collect data on nesting females and relocate eggs found to hatcheries to prevent egg poaching and ensure better hatch rates. They also monitor hatchling emergence so that baby turtles get released back to sea as soon as they are hatched. 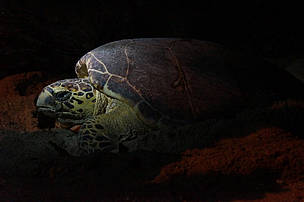 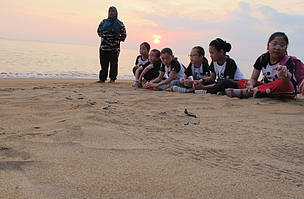 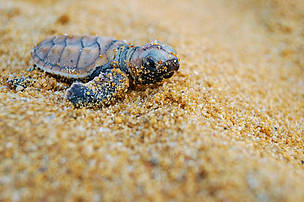