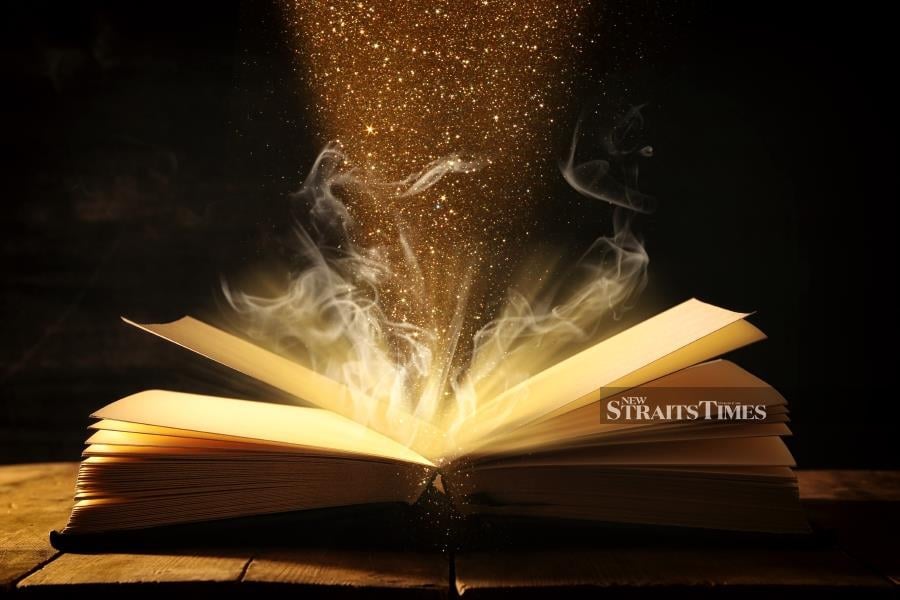 “TELL me a story, ma…” begs the child, weary with the play of the day and ready for that happy hour just before bedtime. And the mother responds to his plea with some of the old favourite tales. Perhaps it may be a tale of a fiery princess who ruled an ancient land, a talking mousedeer who used his wits to get out of sticky situations, or even a dragon that lurks at the bottom of the lake.

With National Tell a Fairy Tale Day celebrated on Feb 26 every year, we take a look at fairy tales built out of local myths and legends that have endured through the ages.

The magic of fairy tales never dies. Strange creatures, magical lands, beautiful princesses and wise kings — they’re like sprinkle of fairy dust on tales that in their essence, are stories of reversal.

A fairy tale has little tolerance for ambiguities. The dangers are real and they’re everywhere. Tread carefully, these stories remind us. Keep your eyes open. Be kind and generous and fair. And for God’s sake, don’t succumb to greed because that never ends well.

Our Malaysian folk tales are no less magical or fascinating as the usual fairy tales we read about. Forget pasty Cinderella or Snow White — our young girls should learn about strong Malaysian queens like Cik Siti Wan Kembang, or the elusive princess who lived up on a misty mountain who thwarted the affections of a king.

Folk tales tell us how we live and keep our local history alive. They pass on the stories and knowledge that may never be written down, only passed on through word of mouth.

Whilst many people feel fairy tales are important for our children, these folk tales are arguably even more so. By passing these local tales onto our children, we help them develop a connection with the land they live in.

From making sense of strange, local place names to enriching important local history, folk tales are just as interesting as any fairy tale. So the next time a plaintive voice pleads: “Tell me a story!”, why not reach for our Malaysian tales and let the enchantment begin?

Sang Kancil tells the stories of the wily mousedeer — the trickster, wise one and symbol of wit. Not unlike the classic story of David versus Goliath, Sang Kancil faces a host of daunting adversaries, including Sang Rimau, the Tiger, Sang Buaya, the hunter and sometimes the whole gamut of animals, but manages to outwit all of them. In Langit Nak Runtuh, Sang Kancil is trapped in a huge hole set by a hunter and can’t climb out. He tells all the animals that pass by that the sky is falling. All the animals jump into the hole and Sang Kancil climbs out.

Naga Tasik Chini is the legendary myth of a serpent (Naga) that used to live in Tasik Chini, Pahang. The Jakun version relates the story of how villagers were clearing the forest and making holes in the ground to plant crops. Suddenly, out of the forest came an old lady leaning on a walking stick who proceeded to scold them because they didn’t seek the permission of the spirits. She finally allowed the people to stay provided they didn’t remove her walking stick planted in the middle of the field to mark her territory.

One day, a dog began to bark endlessly at a rotting log on the edge of the clearing. The children threw stones and sticks. Suddenly, lightning struck and a downpour ensued for days. The walking stick was dislodged and water flowed from the hole until the Chini Lake was formed. It’s believed the log was the Naga.

Cik Siti Wan Kembang was the renowned ruler of present-day Kelantan. The daughter of Raja Ahmad and in line for the throne, Siti Wan Kembang was only four when her father died, leaving her to take over his rule. Because she was still a child, the court elders appointed Raja Hussein of Johor as Kelantan’s king regent.

Growing up, Siti Wan Kembang took on many responsibilities and became very skilled in horse-riding and sword-fighting. When the time came for her to take over the throne after Raja Hussein’s passing, Siti Wan Kembang was only 25 but she was ready.

She ruled Kelantan for over 30 years! Although she never married, she adopted Puteri Sa’adong as her daughter after her parents’ passing. Puteri Sa’adong would later take over as ruler of Kelantan.

Arguably the most famous legend in Malaysia, Puteri Gunung Ledang was made into a movie in 1961 and 2004 starring Elaine Edry and Tiara Jacquelina, respectively. It’s also a popular musical having been sold out in theatres in Malaysia and Singapore.

The story tells of a princess who lives in seclusion in Gunung Ledang. The Sultan of Melaka had heard of her beauty and wanted her. In response to a betrothal request from the Sultan, the princess gave seven difficult demands.

The conditions were: a golden walkway for her to walk to Melaka from the mountain; a silver walkway for her to return from Melaka to the mountain; seven barrels of tears (specifically tears from virgin girls) for her to bathe in; seven barrels of young betel nut juices from the betel tree (Areca catechu) also for her to bathe in; seven trays filled with hearts of germs; seven trays filled with hearts of mosquitoes, and finally, a bowl of the Sultan’s young son’s blood.

All the conditions were set on purpose by the Princess to test the Sultan’s love for her. She knew that he would not be able to fulfil them due to their ridiculous and mostly unattainable nature.

The last request would be rather difficult for the Sultan as the boy was his only child. The equally determined Sultan fulfilled all requests but stopped short of sacrificing his prince for a cup of blood. The princess then refused to marry the Sultan who wasn’t willing to sacrifice his son.

The point of the story is that the Sultan was either too proud or too blind to realise that the conditions were the princess’ subtle way of turning his proposal down. Some say that the remnants of the gold and silver bridge still exist, but have been reclaimed by the forest. Others claim that the bridges can only be seen in the spirit world.

One of the most popular tales of Nusantara, Bidasari is still read and performed in Malaysia, Philippines, Singapore, Indonesia and other SEA countries. The story opens with a king who ruled a peaceful land, Kembayat.

One day, a garuda attacked. The king and queen were lucky to escape by night into the very forest surrounding their city. They took the path by the great river. The queen was in the family way, and was due to give birth at any moment.

Tired and anguished, they had to stop often. Finally the sultan spotted a rock under a shady tree by the river. Here the queen gave birth to a beautiful princess who cried out lustily in the silent jungle.

Quite unexpectedly, a beautiful goldfish appeared in the river. It was so tame that the sultan picked it up out of the water. Immediately, the baby stopped crying. Surprised, the sultan dropped the fish into the river, and the princess cried out again, reaching for her mother’s milk. It occurred to the sultan that the fish was a charm for his daughter so he gently scooped up the goldfish and placed it in a golden bowl he had with him.

The queen gently bathed the princess and dressed her in finery. The royal couple knew that they couldn’t take their firstborn with them for they didn’t know what lay ahead of them.

With a heavy heart, the queen nursed the baby before placing her on a float with the golden bowl next to her. The sultan pushed the float downstream as the queen looked on, tears streaming down her tired face.

The river rippled along, rocking the baby gently. The birds in the sky followed it, chirping a sweet lullaby until the float reached the borders of the kingdom and arrived at a fork in the river.

Bobbing along, the float took the fork on the right and soon arrived at the jetty by the riverbank that led to a rich merchant’s house in Inderapura. The maidens who were at the jetty saw the pretty float and pulled it closer. What a surprise to see the beautiful baby girl. Uncertain of what to do, they took the baby and the golden bowl to their mistress.

The merchant’s wife immediately realised that the baby was of royal bearing. She also came to understand that the girl was unusual because her life was bonded to the fish: if the fish was out of the water, the baby stopped breathing.

The merchant and his wife decided to adopt the girl and called her Bidasari. Bidasari grew up to be a fine young lady. Life in Inderaputra was never the same again after she turned 16. She was the prettiest maiden in the land.

The King of Inderapura was married to a beautiful princess who was very jealous of the thought that anyone might be prettier than her. She sought out any beauty who might challenge her. Her maids found Bidasari and the queen arranged for Bidasari to come to live in the palace. Bidasari left her magical fish in her father’s garden.

Once Bidasari arrived, the queen, Lila Sari treated her viciously. But try as she might, she couldn’t harm the girl. Finally the queen’s spies found out about the fish that’s linked to Bidasari’s well being.

The spy stole the fish and once the fish was in the queen’s clutches, Bidasari fell to the ground as if dead. She was sent back to her merchant-father who hid Bidasari in a secluded garden in the forest.

The King, out hunting one day, stumbled upon Bidasari. At that very moment, the fish in the evil queen’s care fell into the water while she was bathing and swam free. Bidasari immediately awoke and told the king the whole story, not knowing who he was.

The king, angered by the queen’s conduct, investigated the matter. Upon her guilt, the evil queen was banished. Not long after, the king married Bidasari.

Ninot Aziz is an award-winning author and hails from generations of storytellers — daughter of Abang Tik,daughter of Chu Rahmah, daughter of Yang Chik, daughter of Bebunga of Pahang. An expert on the subject of heritage and hikayat, Ninot has written anthologies and novels featuring Malaysian legends and myths.

Her latest book on Southeast Asia’s folk tales, Lipur Lara Nusantara will be debuting at the upcoming Kuala Lumpur International Book Fair 2020 at Putra World Trade Centre from March 27 to April 5, 2020. Her other books, including Bentala Naga, a Mak Yong tale can be found at www.silverfishbooks.com.