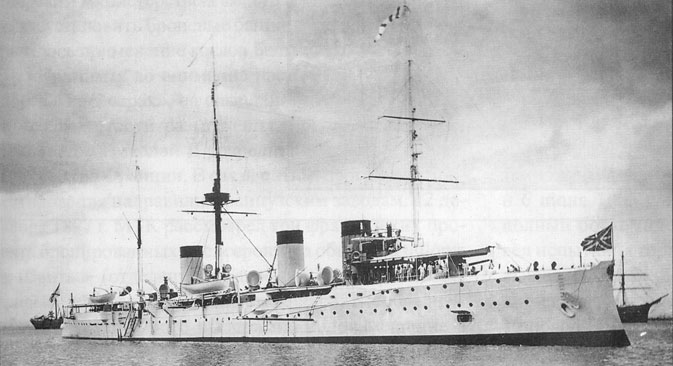 During the First World War, when the German light cruiser SMS Emden sunk the Russian protected cruiser Zhemchug off Penang, local fisherman rushed into the Strait of Malacca in small boats to save the lives of over 100 Russian sailors.

October 28, 1914 will always be looked upon as a dark day in Russian naval history.  A raid of George Town harbor in Penang by a German light cruiser claimed the lives of 88 Russian sailors. Amidst the tragedy, there were acts of bravery from Malay fishermen who set off on small boats, at the risk of their own lives, to save as many Russian sailors as they could.

The Zhemchug, a Russian protected cruiser of the Pacific Fleet with a displacement of 3153 tons, was part of the allied joint task force that pursued the German East Asia Squadron.

The protected cruiser was launched in 1903 in St Petersburg and had a checkered history.  It was originally built to be a part of the Russian Navy’s Pacific Fleet to be based in Port Arthur and Vladivostok. It escaped destruction at the hands of the Japanese Navy at the Battle of Tsushima in 1905, and managed to reach the neutral port of Manila, where it was interned by the United States.

In 1914, it was moored in George Town, the main port in the British Crown Colony of Penang, just off the Malayan mainland.  The clouds of the First World War were visible over the Malacca Strait, since the European powers were jostling for space even in Asia. In the wee hours of October 28, the SMS Emden, which was led by Lt Commander Karl Von Muller, headed towards George Town on a raiding mission.

The German light cruiser approached Penang at 04:30 hours, disguised with a false smoke stack, making it resemble a British cruiser. “Once the Emden was within the harbor, the German naval ensign was run up and it then began the attack,” says Suryani Ahmed, a historian based in Kuala Lumpur. “It immediately fired a torpedo at the Zhemchug, giving the Russian ship little opportunity to recover.”  The Zhemchug did manage to return fire but within minutes a second torpedo struck its forward magazine, causing a major explosion.

Sino-Soviet victory over Japan should not be attributed to U.S. – historians

“As soon as it was evident that the Russian ship was sinking, Malay fishermen set off to rescue the sailors,” Ahmed says. “Over 100 sailors were saved by the Malay fishermen.”  The attack, which claimed 88 lives, also injured 121 sailors.

Just after the Zhemchug was sunk, the French destroyer Mosquet, returning from a patrol, made its way to the harbor. “It pursued the Emden, but was soon sunk by the German light cruiser,” Ahmed adds. 47 French sailors died and 36 were wounded.

There were repeated intelligence warnings of an attack given to the British harbor authorities, but they failed to act, Dr John Robertson, a retired British psychiatrist with a military background who published  ‘The Battle Of Penang,’ told the The Star.

“At first (after the battle), the British tried to muzzle the local press, and then, in a singular act of perfidy, the British government blamed their own allies – the French for cowardice and the Russians for incompetence. Neither was true, but that version of events has stuck for the past 100 years … ’til now!”  Dr Robertson told the paper.

A hundred years after the battle, the then-Russian Ambassador to Malaysia, Lyudmila Vorobyeva visited Penang for a ceremony that paid tribute to the Russian sailors and expressed gratitude to the heroic Malay fishermen.

“Even before our two countries had official diplomatic relations, there was a piece of evidence in history about people-to-people relationship when the local Malaysian fishermen rushed into the sea with their small boats and rescued the drowning sailors,” Vorobyeva said, according to a report in The Malaysian Insider. “For that, we are forever grateful to Malaysians,” she added.

“Russia will never forget this noble act and Penang will always have a special place in our hearts,” Vorobyeva said.

Historian Suryani Ahmed adds that many of the Russian sailors, who were rescued, were cared for by locals and expats in Penang. “Many of them stayed on for up to four months in Penang before they went back to Vladivostok,” she says.

Ten Russian sailors are buried in George Town’s Western Road Cemetery.  Penang’s Jerejak Island also has a monument that honors the Zhemchug sailors.  Soviet sailors renovated the monument in 1972 and 1987.  “This was probably the earliest link that the people of Malaysia and Russia share,” says Ahmed. “Whenever Russian sailors call on the port of George Town, they make sure they visit the monument…It is a sort of pilgrimage for them.”