Journey up the Rejang River – The other side of Kuching

Journey up the Rejang River – The other side of Kuching

Published on Nil | by mysarawak.weebly.com 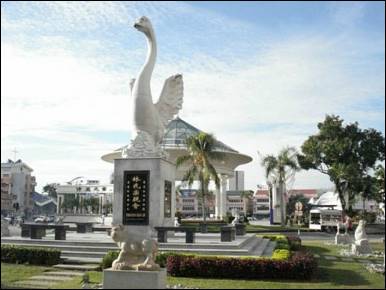 Beyond Kuching, cosmopolitan city life fades away and the innumerable rivers that mark Sarawak’s green interior become the highways to the center of inland settlements. Sibu, capital of Sarawak’s third and largest division, is an easy-going and predominantly Chinese town, where trishaws are still in service and where fish markets are overflowing with gigantic freshwater fish such as carp and the much-prized kolong, which finds its way to the elegant dining tables of Hong Kong.

Although it is possible to take a bus from Kuching to Sibu, you will have your bones considerably rattled by the time you arrive. A more pleasant way is by express boat via Sarikei, or by small plane, the latter giving you a wonderful view of the never-ending jungle with its silver rivers snaking their way through the landscape. The flight takes only forty minutes. Flights also go further up the Rejang River to Kapit and Belaga, so you have the choice of taking the boat one way and flying the other.

From Sibu, the express boats, long and narrow and with interesting names, depart regularly. They can take you up to Kapit, and also to Belaga if the river level is high enough. You will be tumbling aboard with an assortment of other passengers: Chinese merchants taking their wares to distant longhouses, river and inland officials (usually Iban) off to attend a longhouse festival, and school children who learn their lesson in Sibu but return for holidays to their family longhouses.

Although express boat prices are fixed, hire a longboats depends (even for locals) on the water level, weather, time of day, river currents and how willing the boatman is to hurry the journey to fit your schedule. For foreigners, prices will naturally be much higher and bargaining is in order.

Along the way, the express boat stops at Kanowit and Song and even smaller settlements. On the river, boats and canoes struggle up or fly downriver, and suddenly a huge floating raft comes into view. Sarawak’s longest river is also the natural conveyor belt for massive timber industry, and huge logs are stacked on rafts to float downstream. Should one of these hazards become waterlogged, they present considerable danger to outboard motors; with that very danger in mind, the express boats have their bellies lines with steel. 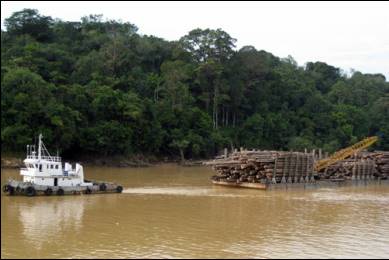 To those who live far up the Rejang River, the bustling marked town of Kapit is the local equivalent of London. Kapit has electricity 24 hours a day, shops selling goods at considerably higher prices than back down the river at Sibu, a market and several small hotels.

Kapit lies in the heart of Iban country, Sarawak’s largest indigenous population. Ibans were once the headhunters who gave Borneo its romantic and primitive reputation. Some understanding of their culture will help the visitor to see that they were not merely bloodthirsty in an anarchic way.

To bring good fortune to the longhouse and fame and a bride for themselves, young Iban warriors would (and some still do) set out from home to travel “the world”. Heads of a few enemies were brought home to imbue the longhouse with protective spirits. Only warriors of equal strength, and never women, the old or sick were killed. Sadly, these traditions were much misunderstood by the 19th century writers who reveled in writing lurid stories about the Iban tribes. 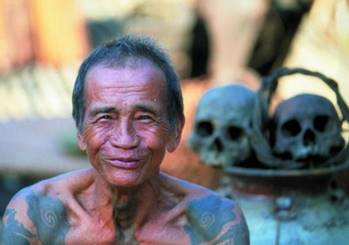 Ibans are in truth a proud and democratic people, sharing a communal way of life in their longhouses, honoring the supernatural forces recognized by their religion, and remaining loyal to their heritage and to their heroes. If they have been converted to Christianity, as many have, they take up hymn-singing in the evenings with as much gusto as in the days of tribal chanting and sacrificial ceremonies, and there is still much overlap between the old and the new faiths.

One early leader of the Iban was the warrior Rentap, whose name in Iban means “one who makes the world shakes”. Tribal wars were common in Rentap’s days, when neighboring tribes competed for favorable soils in which to plant their rice. Sarawak is an infertile land once the jungle vegetation has been removed, and the thin topsoil quickly erodes after monsoon season or two. For many years, longhouse dwellers were forced to resettle, even if it meant destroying another community’s chances to do so.

Rentap, being a powerful and dauntless Iban chief, did not want James Brooke or any other foreigner to rule over his people. He fought so fiercely against the Rajah’s foot soldiers that it took five years and a 4.5 kilograms cannon to defeat the chief. Rentap eventually surrendered, but not before letting the Rajah know that Ibans could not be pushed around.

The Iban gradually grew to respect the Brookes, even of their ideas conflicted with the traditions of head-hunting and piracy. The second Iban to rise to fame was Penghulu Koh, reputedly tattooed from head to toe. Tattoos are given to warriors for their great deeds, and Penghulu Joh had obviously done quite a few. However, he reformed to become one of the Rajah’s staunchest supporters, and was later conferred the title of Master of Peace Ceremonies, and paramount chief of all Ibans.

The spirit of Penghulu Koh still lingers in many Iban longhouses. Faded photographs of the Rajah Brookes and Queen Elizabeth in her twenties reverently hang alongside those of great Iban chief.

Nowadays, life is slowly changing in the longhouse. Along with these photographs may be found newspaper clippings of Asian beauty queen competitors, racing cars and Mr. and Mrs. Elvis Presley cutting their wedding cake. The “secluded daughters” tradition has lapsed. Many longhouse heirlooms – beautiful antique swords and silver belts – have been sold to Chinese jewelers from the big towns. Children who once enjoyed carefree days frolicking in the longhouse and the rice fields are now in the school studying Bahasa Malaysia and Physics.

Tourism has a mixed effect on the longhouses. On the one hand, the virile and difficult dance of the warrior, and the chants and gongs accompanying it, are being revived because of touristic interest. On the other, the traditional handicrafts made by the women in the olden days with such loving care are now being churned out at a fantastic rate to meet the demands of the tourist shops in Kuching, casting aside much of the quality on the way. Without a doubt, further changes are on the way.

On the optimistic side, many young Ibans, even though of tattooing, are becoming more and more interested in their heritage, and in protecting their traditional homes from the onslaught of modernism and from the threat of logging. Of all the tribes the Ibans have been one of the most vociferous opposes of the latter problem, mainly because many of them have had foreign education and greater contact with the modern world than such tribes as the nomadic Penan and Punan.

To get an idea of what is afoot in the way of changes in longhouse communities; make the effort to spend at least one night in a longhouse. Remember to bring the customary gifts, which, you may find after you stay there, are hardly sufficient recompense for the warm hospitality offered to you.