Published on Nil | by malaysiasite.nl

“I came to this temple specifically for the sitting Buddha image. This is the 4th largest statue in Malaysia, after the Lord Murugan statue in the Batu Caves, the permanent Buddha in Wat Phothikyan in Bachok, and the Guan Yin statue at the Kek Lok Si in Penang. The seated Buddha is viewed with the same awe – it is inspiring. The statue was not only powerful and impressive, but really beautiful due to the fine details and the complex finish. Really incredible, and worth it despite the relatively remote location.” 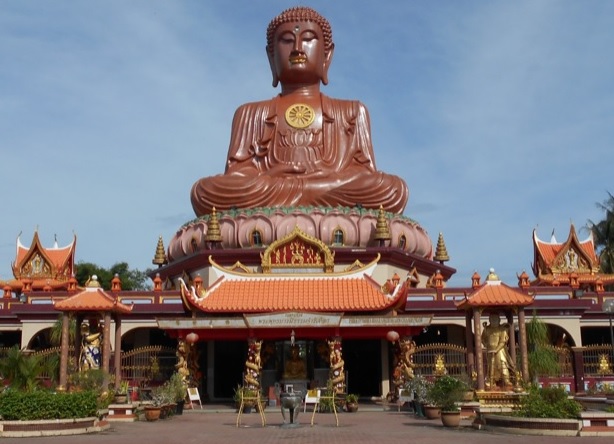 Tumpat is a town about 20 km above Kota Bharu. It is close to the Malaysian border and it is well known that in this town the so-called “Jungle Train” has its final station. On the other side of the border, the railway continues. However, if you want to go to Thailand, for example, you have to cross the border on foot and then board the train.

Tumpat is also known for its temple with the big sitting Buddha: the Wat Machimmaram. It is an impressively large image, sitting on a lotus. This lotus flower resembles a scale. It is a bit strange to encounter a Buddhist temple in this Islamic part, but so close to the Thai border it is not surprising that there is a Thai (fled) community here.The temple is a shining example of the famous religious tolerance of Malaysia, where such a Buddhist image of this size could be built. Especially in a state such as Kelantan, where one is predominantly Muslim. The huge sitting Buddha statue is about 30 meters high. It is often wrongly described as the highest in Southeast Asia. It may have been when it was completed in 2001, but since then it has been overshadowed by other images. It is in size the fourth large image in Malaysia.

If you take a closer look, the Buddha statue appears to be covered with small shiny mosaic tiles. The lower lip of the Buddha is covered with gold, possibly gold leaf, paint or gilded. The statue sits cross-legged on a picture of a lotus flower that forms the roof of the temple. The petals of the lotus give an idea of a scale. The architecture of the temple is a mixture of Thai and Chinese influences, as some statues of gods are typically Chinese. 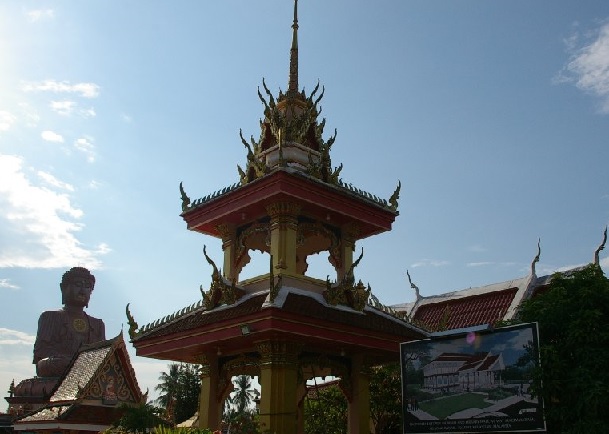 Inside the temple, murals and frescoes in both Thai and Chinese styles are part of Buddhist mythology. These are definitely worth a look. You can go to a second floor on one of the buildings. A roof with some trees and other shrubs / flowers.
A team of Thai workers took ten years to complete the temple. The work was completed in 2001. At the temple is also a turtle pond and a shop, where one can also buy something to eat. There is no entrance, but you can give a donation. There is also enough parking space.