Bridging a forest: Animal crossings that reduce the perils of roads

Bridging a forest: Animal crossings that reduce the perils of roads 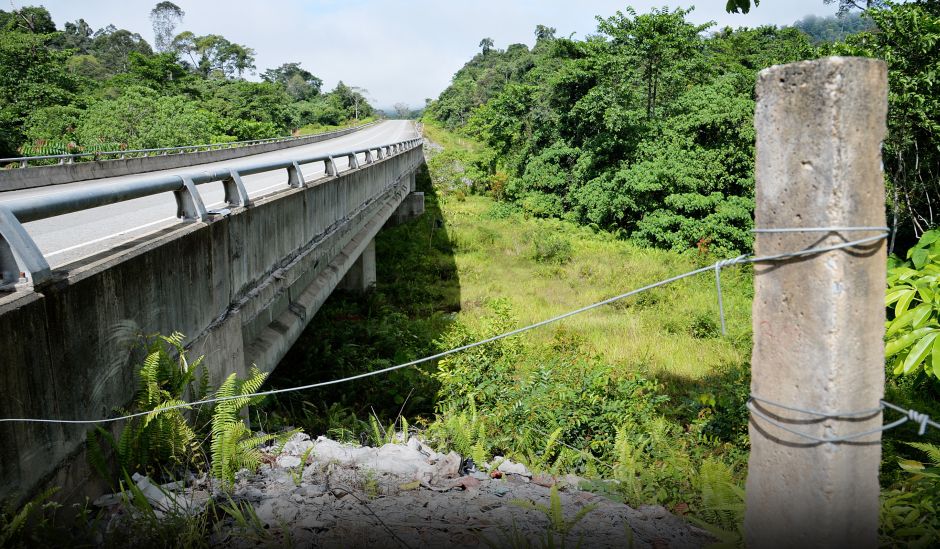 By raising the road on columns, a wildlife crossing is maintained beneath this viaduct at the Aring-Tasik Kenyir road in Terengganu. – Kevin Tan/The Star

When wilderness is sliced apart by a road coursing through it, eco-friendly engineering is needed.

For people, roads connect. They create linkages and bring people places, even to remote corners of the world. For wildlife, on the other hand, roads do just the opposite. They create barriers which cut animals off from a larger landscape. They keep animals away from food and potential mates, and are also deadly to cross. Despite all these threats to wildlife, roads that cut into wild habitats continue to be built, in the name of development and to shorten travel time. 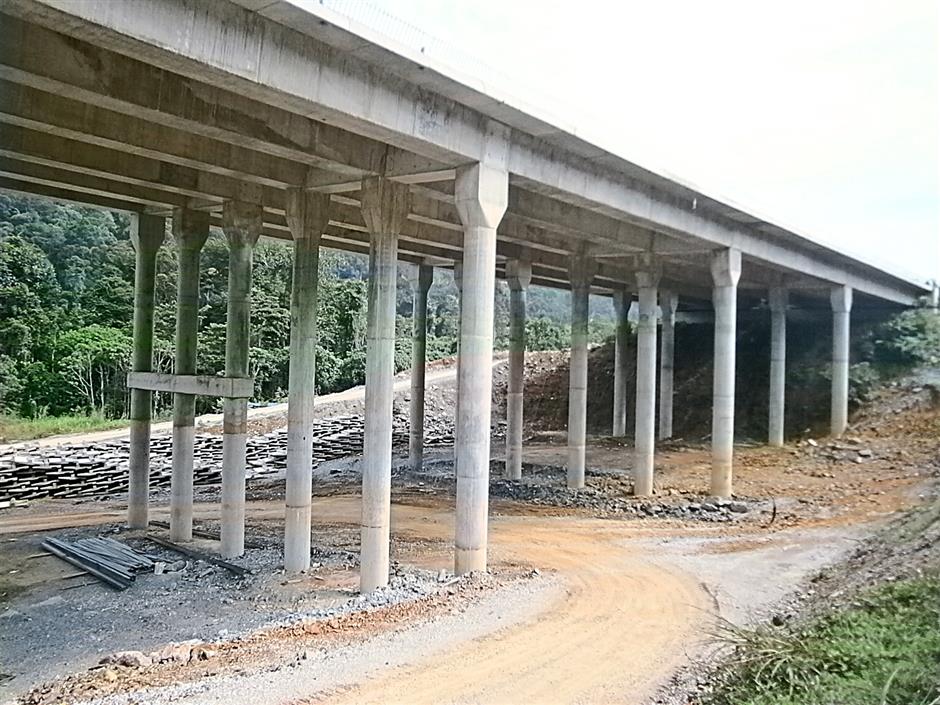 The Sungai Yu viaduct during construction last year. The animal crossing underneath the road is to enable wildlife to move between the Sungai Yu and Tanum forest reserves. – TAN CHENG LI/The Star

One such road is the Simpang Pulai-Gua Musang-Kuala Berang Highway, or what is also known as the Second East-West Link which crosses the breadth of Peninsular Malaysia. When proposed in the early 2000s, it raised concerns as it would slice through species-rich forests and break them into fragments possibly too small to sustain healthy populations of animals, as well as impede wildlife movement.

To resolve this, the Public Works Department changed the design of one section of the road – between Aring in south-east Kelantan and Pasir Pulau in Tasik Kenyir, Terengganu – to include wildlife crossings. So, instead of the usual approach of putting the road on an embankment or retaining walls when it traverses valleys, the road was raised above-ground on columns – what is known as viaducts. These bridges allow a passageway beneath for wildlife to safely cross between forests flanking the road. And so, the country’s first designed wildlife crossing was created.

In Peninsular Malaysia, this wildlife-friendly engineering is also seen at the Kuala Lipis-Merapoh road in Pahang. A third one being planned is along the Gerik-Jeli Highway (East-West Highway) in Perak, at the wildlife corridor between Temenggor Forest Reserve and Royal Belum State Park. Wildlife crossings can also take the shape of underpasses, overpasses or bridges, tunnels and culverts but locally, viaducts appear to be the favoured design.

“Without the viaducts, wildlife will not be able to move between both forests. The viaducts also prevent animals from venturing into roads where they risk being run over by vehicles,” says Yusoff Shariff, director of Terengganu Wildlife and National Parks Department (Perhilitan). 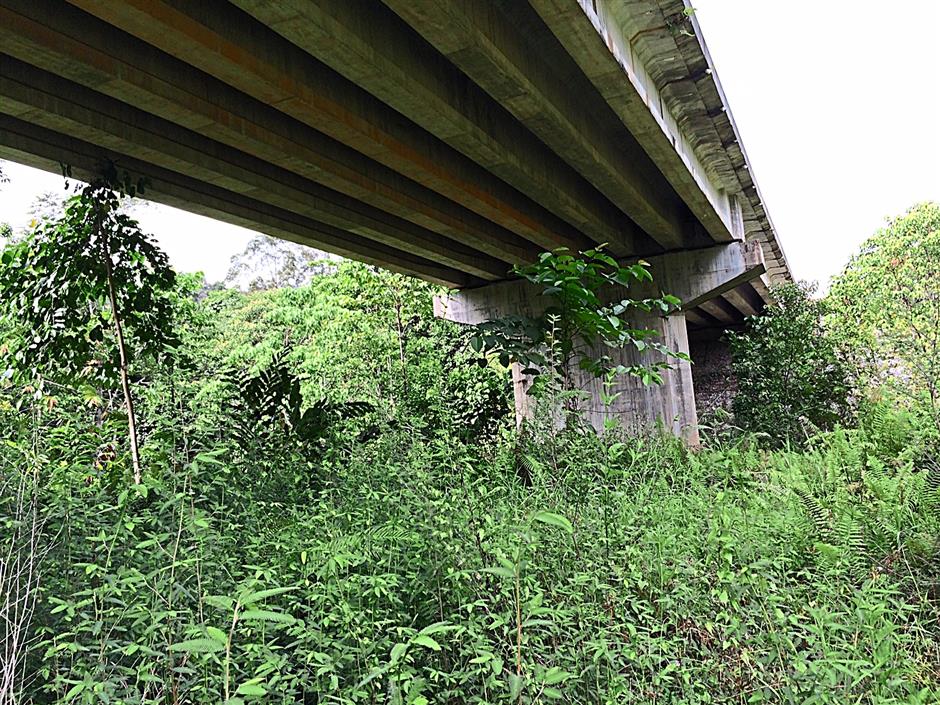 Path for wildlife: To lessen the impact of roads on forests and wildlife movements, viaducts are being built as they provide a corridor beneath which links up spliced forest. This viaduct is at the Aring-Tasik Kenyir road in Terengganu. – TAN CHENG LI/The Star

Although there are several viaducts along the road, three were specifically designed with wildlife crossings in mind. They measure 245m, 140m and 245m in distances and were constructed between 2007 and 2008 at a cost of RM30mil.

Yusoff says the locations of the viaducts were chosen after surveys had determined existing animal movement routes. These crossings generally follow elephant routes as smaller animals follow the path of the pachyderm.

“Elephants break off branches as they feed along their route. This encourages the growth of new shoots which in turn attracts herbivores such as deer. Predators after these preys, such as tigers, will then follow suit.” 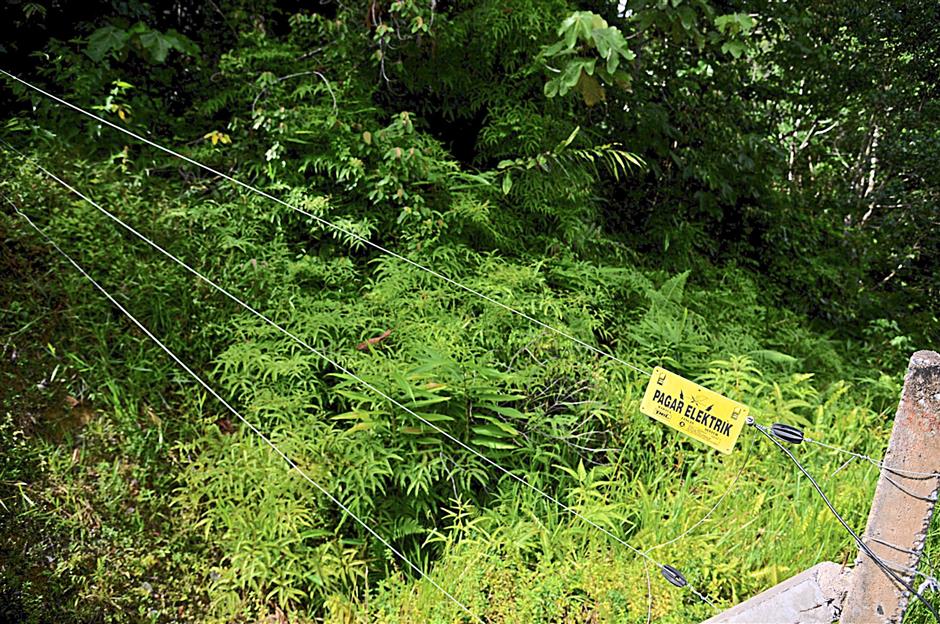 Electric fencing stretching 11km on either side of the Aring-Tasik Kenyir road helps direct animals to a safe passage beneath the viaduct and away from the road where they risk being knocked down by vehicles. – KEVIN TAN/The Star

When first completed, not many animals used the crossing as the land had been disturbed and lacked foliage, says Ahmad Kamsul Alias, assistant director of Terengganu Pehilitan.

He says to lure animals to the crossing and away from the road, “habitat enrichment” was done, by planting grasses and plants which the animals feed on. Artificial salt licks were also made under the bridges for the same effect.

Electric fence, installed on either side of the road for 11km, also helps direct animals towards the crossing and deter them from encroaching onto the road.

“This works as once, when the electric fence malfunctioned, we observed more road kills,” says Yusoff. He says while road kills no longer happen in the vicinity of the viaducts, they still occur at other sections of the highway. To counter this, he says signs warning motorists about the presence of wild animals have been put up. All these additional measures to ensure that the eco-viaducts are effective (electric fencing and habitat enrichment) incurred an additional cost of RM3.5mil.

There are always fears that the viaducts will make wildlife easy targets by poachers. To ward off this threat, Yusoff says Perhilitan enforcement team conducts regular patrols.

The country’s second eco-viaduct is in Sungai Yu near Merapoh in Pahang, and was completed earlier this year. Sungai Yu is an important forest corridor that bridges two areas crucial for tiger conservation – the Main Range and Taman Negara.

These forests have long been separated by the Kuala Lipis-Merapoh trunk road (Federal Route 8). Under plans to upgrade this road into a four-lane highway, eco-viaducts were included so that a passageway for animals is maintained between Sungai Yu Forest Reserve (on the Main Range) and Tanum Forest Reserve (adjacent to Taman Negara).

The linkage gives wildllife a wider home range. Without this connection, Taman Negara will be cut off from the rest of the forested landscape in the west, and risk ending up as a “habitat island” (a nature site surrounded by development). 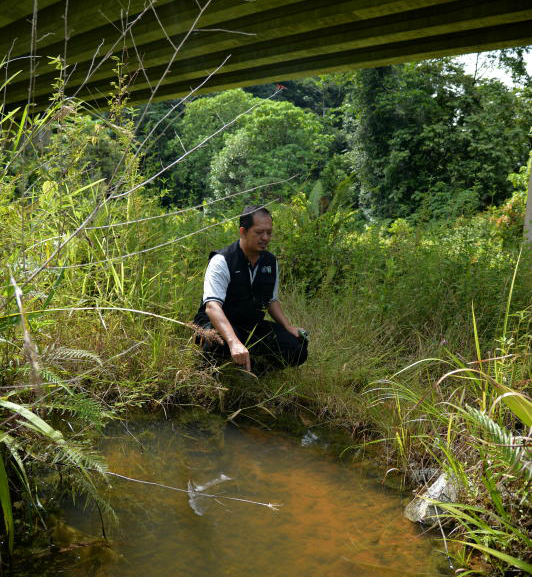 Salt licks are made to lure wildlife to the animal crossing beneath the viaduct, explains Ahmad Kamsul Alias, assistant director of Terengganu Wildlife and National Parks Department.

The Sungai Yu wildlife crossing consists of a main viaduct almost 1km in length and two shorter ones of 300m and 80m. It has been reported to cost RM89.4mil (infrastructure plus land costs).

But building wildlife crossings alone cannot lessen the impact of siting roads in forested areas. The adjacent wild lands must be preserved, too, with controls over their usage, says tiger biologist Dr Mark Rayan.

“If the surrounding forest is not maintained, then the viaduct no longer serves its purpose and becomes redundant.” He says forests around viaducts at the Gerik-Kupang road in Perak and Kedah (which give animals a passageway underneath because of their elevated structure), has been converted into oil palm and rubber plantations.

Fortunately at the Sungai Deka eco-viaducts in Terengganu, 15,000ha of forest within the vicinity has been made a wildlife sanctuary. At Belum-Temenggor, land flanking both sides of the East-West Highway, previously earmarked for development and agriculture, has been gazetted as the Amanjaya Forest Reserve.

For the Sungai Yu eco-viaducts in Pahang, the Town and Country Planning Department has proposed that remaining stateland forest there be gazetted as protected forests so as to buffer the wildlife corridor.

As further safeguards, it called for a stop on expansion of human settlements, and for oil palm and rubber plantations there to apply green practices.